STANDING OUTSIDE THE FAITH Community of St. Sabina, the Rev. Michael L. Pfleger Father announced Thursday a gun buyback to fight violence plaguing Chicago’s streets and amid his church’s ongoing annual “Friday Night Peace March,” which kicked off at the start of the summer.

In the wake of three mass shootings, Pfleger expressed frustration and outrage during a press conference.

“Last night, we had three mass shootings in Chicago, two on the West Side, and one on a party bus in Old Town,” said Pfleger. “Chicago is out of control, gun violence is killing our children, and blood is running through our streets.”

The gun buyback will begin next week (starting on Monday, July 26) and continue, Pfleger said, until the $25,000 provided by a donor for this purpose had been exhausted. 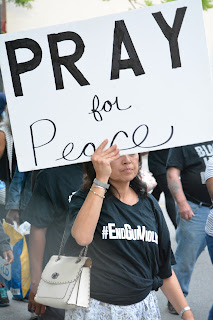 That donor is Tom Sondago, a Chicago businessman who appeared at the press conference. According to Sondago, the death of 13-year-old Adam Toledo, shot and killed by a police officer while reportedly armed and running from officers. Sondago said the Toledo shooting compelled him to do more to try and get guns off the street and to help quell the city’s violence.

“A few months ago, I watched one of our children Adam Toledo, lying under a garbage can in a Chicago alley shot to death, and I can’t wrap my head around it,” Sondago said. “I met with Father Mike, and said, ‘I have to do something.’ I gave him some ideas, and he finally said, ‘Hey Tom, why don’t you do what you do best.’

The gun buyback is a no-questions-asked proposition that exchanges cash for guns turned in. Those turning in guns must be age 25 or younger.

“We want to try to help save lives. We want to reach the younger brothers and sisters, who are not usually being reached in a lot of the gun buyback programs,” Pfleger said.

Those turning in guns will receive $100 for rifles, $200 for handguns or assault rifles and $20 for high-capacity magazines/clips.

Pfleger noted that the gun buyback is not solely about cash but also an opportunity for his church to impart life, hope and an opportunity for change and social uplift for those who enter the church’s doors to turn in a gun, and where staff will be on hand to offer job training, counseling and educational opportunities.

“When a young person brings a gun, they will not just get $100 or cash. They will also have a conversation with a staff member from our Strong Futures program, so that we can find out how we can serve them, give them a job, mentor, and help their situation,” Pfleger said.

Pfleger said no one is immune from the city’s violence, not even him who has been impacted firsthand.

Indeed during the press conference, behind Pfleger and his supporters stood Tenika Blackman, 40, holding her granddaughter in her arms. Blackman lost her son Lewis Funches, 22, to gun violence in the summer of 2020. A dancer who was waiting to gain admission to the Chicago Police Academy, he was shot in the head and later died in an apparent unintended target when shooting broke out at a block party on June 27, 2020.

“My son wanted to be a police officer and he loved his city,” Blackman said. “I’m here because this is my city. I don’t want to give up and I know if my son was alive, he would be here.”

Her son, she said, aspired to become a detective. According to Blackman, her son was anticipating a spot to open at the Chicago Police Academy in hopes to make his dream come true.

Following her son’s death, the Chicago Police Department issued a tweet stating, “We extend our heartfelt condolences to the family of Lewis Funches, whose dream was to become a #ChicagoPolice detective. The death of this young man to senseless gun violence is a tragic loss for the CPD and this city.”

Asked what she wants Chicago to remember about her son, Blackman said, “That my son laughed and lived life. He was a go-getter and pushed forward. When people told him he should give up, he didn’t. He took his test for the police academy three times, and he passed.”

Pfleger, reflecting on movie director Spike Lee’s description six years ago of the violence in Chicago necessitating the declaration of “a state of emergency,” said that today “it’s even worse.” 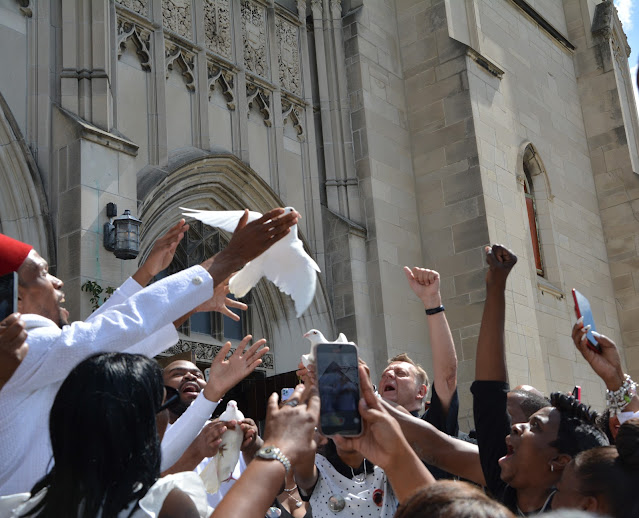